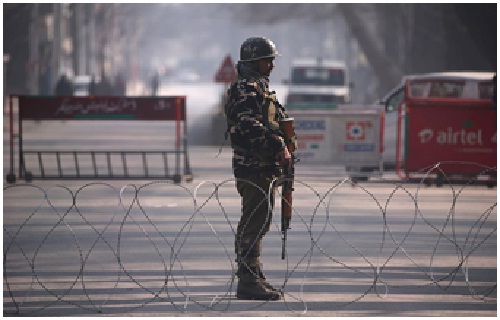 In this December 17, 2018 file photo, an Indian policeman stands guard behind concertina wire laid across a road leading to the Indian army headquarters in Srinagar. The Organization of Islamic Cooperation appointed special envoy for Jammu and Kashmir on Saturday to help resolve the decades-old conflict between South Asia’s two nuclear-armed powers, India and Pakistan. (Reuters)

The Organization of Islamic Cooperation’s (OIC) special envoy for Jammu and Kashmir can help resolve the decades-old conflict between South Asia’s two nuclear-armed neighbors – India and Pakistan – by projecting the Kashmir issue at various international forums and engaging all stakeholders in a meaningful dialogue to find a sustainable solution to the dispute, Kashmiri leaders and experts said on Sunday.

The OIC appointed Yousef Aldobeay of Saudi Arabia as its special envoy for Jammu and Kashmir, besides extending its support to the ‘legitimate right to self-determination’ of the people of Jammu and Kashmir in accordance with United Nations resolutions.

Since 1947, Kashmir, a Muslim-majority region with 86,000 square miles of territory, remains disputed between India and Pakistan. Both countries claim it in full but only control parts of it. The two nations have also fought wars over the territory, but the dispute continues to linger on.

‘We hope that the OIC special envoy [on Jammu and Kashmir] will support and highlight the legitimate and peaceful freedom struggle of Kashmiris at all international forums and expose Indian atrocities against them,’ Mushaal Hussein Mullick, chairperson of the Peace and Culture Organization, told Arab News on Sunday.

She said that activists and freedom fighters in Kashmir had been asking Muslim countries for years to appoint a global envoy who could amplify their voice internationally, adding it was ‘encouraging to see it happen finally.’

‘The position of the special envoy is very powerful because it has the backing of all Muslim countries … and it also goes beyond simple condemnations and news reports highlighting Indian violence against unarmed Kashmiris,’ said Mullick, who is also the wife of Jammu and Kashmir Liberation Front (JKLF) leader Yasin Malik.

A final communique of the 14th summit of the OIC held in Makkah called for the establishment of a UN Commission of Inquiry to “investigate grave human rights violations [in Kashmir] and urged India to allow the Commission and other international organizations access to IoK [Indian occupied Kashmir],” Pakistan’s foreign office said on Saturday in a statement.

With 57 member states and a collective population of approximately 1.68 billion people, the OIC is the world’s second largest intergovernmental body after the United Nations.

‘The OIC Summit gave a tremendous platform to Kashmir. We are lucky to have the world’s second largest multilateral organization take up the Kashmir conflict in such a robust way,’ Ahmed Qureshi, a Kashmir affairs analyst, told Arab News.

Discussing the appointment of the OIC special envoy, he said that a difficult challenge awaited him as ‘he will be walking into one of the most difficult and protracted conflicts in the world today. But the good thing is that momentum exists and he can capitalize on it.’
Sardar Zaid Sajid, a Kashmiri human rights activist, also lauded the appointment, saying that the OIC focal person must try to resolve the conflict since it ‘poses a security threat to the whole world.’

‘Both Pakistan and India are nuclear-armed countries and Kashmir conflict can trigger a deadly war between them anytime,’ he warned, urging the special envoy to push the UN to hold plebiscite in Kashmir as per its resolutions.